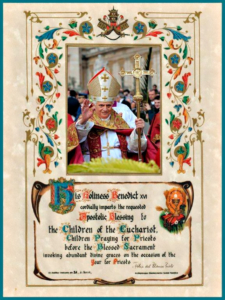 Children of the Eucharist - the Children’s Program of the International World Apostolate of Fatima received a ‘perpetual’ Apostolic Blessing for children praying for priests before the Most Blessed Sacrament, in honor of the ‘Year for Priests’ 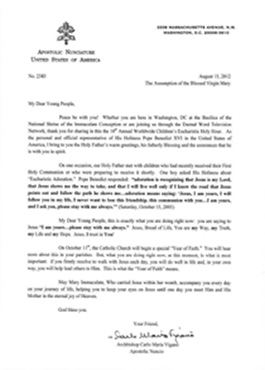 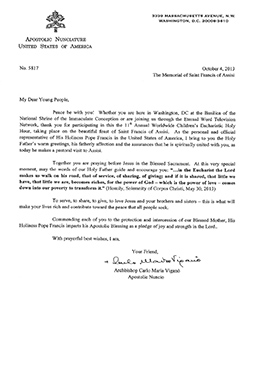 Welcome to Children of the Eucharist

United, let us work to Ignite the flame of faith in the hearts of the children of the world as they follow the way of the Little Shepherds of Fatima!

CHILDREN OF THE EUCHARIST is an educational and evangelistic program of the International World Apostolate of Fatima, a public association of the faithful of pontifical right, member of the Pontifical Council for the Laity. CHILDREN OF THE EUCHARIST and International World Apostolate of Fatima work together in promoting the message of Our Lady of Fatima. We highlight Eucharistic Adoration, following Blessed Francisco whose desire it was to console the Heart of Jesus.

ONE PROMISE AND FIVE EASY STEPS

When the Angel of Peace appeared to the three Shepherd Children in Portugal followed by Our Lady in 1917, the Little Shepherd children were instructed to pray, adore Jesus, and make sacrifices for the reparation of sins. We have taken the message of Our Lady of Fatima and condensed it into One Promise and 5 Easy Steps. The programs available through the CHILDREN OF THE EUCHARIST are both spiritual and devotional, leading children and young people to a greater understanding of Our Lady’s message, adoration, and love for Jesus in the Holy Eucharist. The foundation of the program is Eucharistic and devotion to the Immaculate Heart of Mary. This simple program is based on the message of Fatima and when implemented will help children, young people, and ‘yes’ adults to begin or rededicate themselves to a life of prayer, penance, and sacrifice and to become sensitive to sin as they grow in virtue, grace, and holiness.

This program fulfills the appeals of recent popes to children for their prayers and sacrifices to convert sinners, appease the Divine Justice, and usher in a new springtime of holiness in families and in the world.

…and a little child shall lead them… Isaiah 11:6

CHILDREN OF THE EUCHARIST operates both in Canada, the United States and on an international level. The Board of Trustees has recently incorporated in order to strengthen our outreach and effectiveness in promoting our programs for youth. We believe these programs have the ability to re-energize and re-catechize the family through Eucharistic and Marian devotion in order that the Catholic Faith may take root deeply in its members. As Pope Benedict XVI (Cardinal Ratzinger at the time) wrote in 2000 in his theological commentary on the Third Secret of Fatima:

Popular piety is a sign that the faith is spreading its roots into the heart of a people in such a way that it reaches into daily life. Popular religiosity is the first and fundamental mode of “inculturation” of the faith. While it must always take its lead and direction from the liturgy, it in turn enriches the faith by involving the heart. Now is the time to gather children all over the world, in parishes, schools, and families, into Little Shepherds Prayer Groups to unite their prayers into a powerful force for good.

Archbishop Carlo Maria Vigano, Papal Nuncio of the United States, has prepared messages for the children of the world that were read during the annual Worldwide Children’s Eucharistic Holy Hours.

SCHOOL OF THE IMMACULATE HEART OF MARY

CHILDREN OF THE EUCHARIST invites our world’s clergy, teachers, and parents to help the children and young people in their care to follow the way of the Little Shepherds of Fatima by enrolling them in the School of the Immaculate Heart of Mary, which is the school of God Is Love.

Will you consider becoming an “Ambassador” of the Immaculate Heart of Mary? Help Our Lady in these unprecedented and uncertain times to lead the children of the world to Entrustment to her Immaculate Heart so that she can safely lead them to her Divine Son Jesus, truly present in the Holy Eucharist.

CHILDREN OF THE EUCHARIST thanks you and Our Blessed Mother for helping us with this apostolate, which is simple, but spiritually powerful. It is our prayer that by working with the children the Holy Spirit will be strengthen you and bring you joy. It is the Father’s gratitude which smiles upon you for bringing the His children to Him, with whom He will fight and overcome the last battle against the eternal adversary.

“From the mouth of infants and nursing babes You have established strength against Your adversaries, to make the enemy and the revengeful cease.” Ps 8: 2-3

Our Board of Trustees would like to collaborate with many organizations worldwide to hasten the triumph of the Immaculate Heart of Mary. We hope to work together in charity and love as brothers and sisters in Christ Jesus toward the same goal. Please feel free to contact us, no matter how great or small your organization may be.

May God Bless you!
Children of the Eucharist Board of Trustees

Children of the Eucharist